“Rejoice in the Lord always. I will say it again: Rejoice!”
Philippians 4:4 NIV

Upon Pastor Waechter’s retirement in July 1981, Rev. John A. Lober served briefly as Mount Olive’s pastor for a year from January 1982-1983. It was during this time that Mount Olive celebrated its 50th anniversary on June 27, 1982, with a 4:00 p.m. Vesper Service. The congregation welcomed The Rev. Richard T. Hinz, President of the Southeastern District, as well as many of the former pastors and their wives. Pictured below: back: Pastors Hinz, Lober, Devan, Waechter, Wagner, and Voges; front: Mrs. Lober, Devan, Waechter, and Wagner. 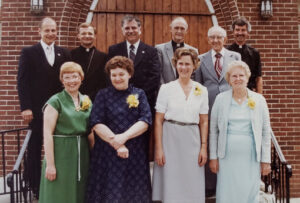 Former Pr. Gerhardt A. Wagner’s message, “The Church Under the Cross” from Galatians 6:14 and special music highlighted the celebration. The Women of Mount Olive, led by Mrs. Yvonne Rodgers, organized the day’s festivities including a congregational dinner after the morning 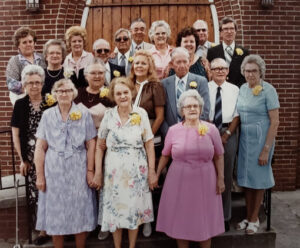 Worship Service and an afternoon reception following the Vesper Service. There were historical displays and photographs on display throughout the church. The Columbia Newspaper ran a special article that gave a brief history of Mount Olive and quoted several members. Interestingly, when asked the biggest future challenge, long-time member Marilyn Brabham responded, “We’re trying to get away from people thinking we are just a family church.”

On February 2, 1981, The Olive Branch Circle was organized. “Let us lift up our hearts and our hands to God in Heaven,” Lamentations 3:41, was the inspirational scripture for this group. Their purpose was to reach out to help where needed in the home, church, community, the civic community, and the world to provide the opportunity for participating in and to learn hand crafts developed by the members. The crafts completed during the year were sold at the Seven Oaks Park Christmas Craft Show with proceeds used to support the mission endeavors of the circle.

In May 1986, the LWML was reorganized and an LWML Board was formed and made up of the chairpersons of the following circles: Tuesday Evening Society, Altar Guild, Hospitality Circle, Martha Circle, Olive Branch, and Sunshine. Various responsibilities were assigned under each group and consisted of a chairman and two or three others. All women were involved in many ways to support the church.

Local projects included cleaning the church building, furnishing all kitchen supplies, sponsoring the nursery, supplying Quarterlies and Cross Connections (District Newsletter) to all women of the congregation, visiting the sick within the congregation, visiting a local nursing home, making and distributing quilts for the needy, and supporting other needs in the church and community. Some of these were added to Mt. Olive’s budget in later years.

At the February 1987 meeting, the Evening Society changed its name to the Essie Sons Society in memory of a dear and dedicated Mt. Olive and LWML member.

The Mt. Olive LWML has hosted Zone Rallies, Joy Events, and was co-hostess with other local churches at two Carolinas District Conventions held in Columbia. “Ms. Essie” was selected to have the Convention Booklet dedicated to her in September 1985. She went to be with her Lord the following year.

“Built on the foundation of the apostles and prophets,
Christ Jesus himself being the cornerstone.” Ephesians 2:10 ESV 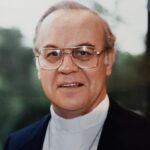 The Rev. Richard Goeres, a retired U.S. Army chaplain, assisted Mount Olive during the time between Pastor Lober’s departure until April 1985, when the Rev. Clarence E. Lobb became Mount Olive’s tenth pastor. It was during his time that the parsonage was renovated by the congregation to become the church office, nursery, and Sunday School classrooms. It was named the “Wagner House” in honor of the former Pastor Gerhardt Wagner 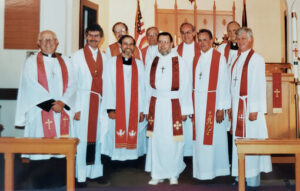 who had made his home there. (Pictured at right is Pastor Lobb’s installation: Pastors Schuelte, Voges, Mueller, Hildebrandt, Runge, Lobb, Goeres, Graecdin, Waechter, and Vick.) 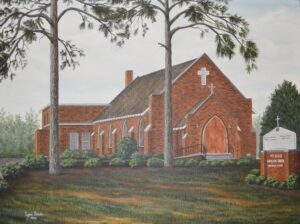 and activities. In 1991, a four-phase plan was presented; however, it was considered too expensive and put on hold. A few years later, another Building Committee was formed to come up with a less expensive plan. Plans were put on hold again when a severe rainstorm caused a leak in the sanctuary during worship.  In 1995, the education building was modified to include a pitched roof with attic storage and the back entry was changed to allow the building of a larger fellowship hall in the future. (Pictured at left is a painting of Mount

Upon the sudden, unexpected death of dear Pastor Lobb, the Reverend Paul Ludwig, a retired pastor and chaplain who had recently moved to Columbia, served as Mount Olive’s interim pastor from 1996 until early 1998. His spiritual guidance and care were instrumental in carrying the congregation as they completed the call process for the next pastor. Pictured are Pastor and Margaret Ludwig.

“Each of you should give what you have decided in your heart to give,
not reluctantly or under compulsion,
for God loves a cheerful giver.” 2 Corinthians 9:7

The Rev. Paul C. Sizemore accepted the call and was installed as pastor on January 18, 1998. Until this time, the church was 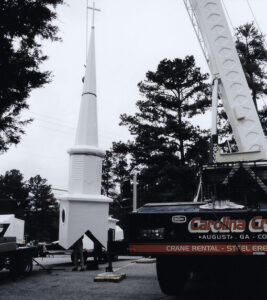 without a steeple. A specially designed steeple from a bequest from Jacob Lester and Essie Sons was installed later that year.

The next project for Mount Olive was to revisit the fellowship hall that former Pastor Lobb had envisioned. Pastor Sizemore and the Building Committee encouraged the congregation to move forward, and on July 11, 1999, the members approved a design for the new fellowship hall with an educational wing on the lower floor. In addition, there would be new offices, additional restrooms, and the renovation of the present sanctuary to include seating for 300 worshippers. These plans included turning the existing sanctuary 180 degrees and adding the transepts and a narthex. During this Challenge 2000 campaign, Pastor Sizemore and a core group of church leaders encouraged each family to give sacrificially, above and beyond, to further God’s Kingdom by our having larger, modernized facilities. From past experience, the congregation knew

that God was always faithful and would see them through.

The groundbreaking ceremony for the construction of the new facilities was held on April 3, 2001 after the 10:30 Worship Service, and construction began in May. During construction, the youth group took a special interest in the renovation of the sanctuary. As part of their meetings, they wrote prayers and scripture verses inside the walls before the sheetrock was installed. In addition, Donald Mueller donated his time and expertise in carpentry to work with Pastor Sizemore to extend the altar table. Don also built the pulpit, plant stands, hymnal boards and another work table for the narthex.

During the renovations, Richard Schneider designed and crafted the large triple cross that was going to be located in the new narthex. The project was funded by memorials to Marilyn Bauer’s parents.

The congregation once again worshiped in Irmo Elementary School’s auditorium during the construction process. Newer member, Aresa Boykin, remembers three older members, Mr. and Mrs. Heber Meetze and Mrs. Gladys Meetze, sitting in chairs in the back because the folding auditorium seats were too low. Every Sunday morning, they would always want to “carry on” over Aresa’s infant grandson, Noah.

The first service in the new sanctuary was Easter, The Resurrection of Our Lord on March 31, 2002. At that service, infants

September 15, 2002 marked the official dedication of these new facilities – “that they would be used to the glory of God: to the Father, to the Son, and to the Holy Spirit.” Just in time for the dedication, the beautiful new stained-glass window (Jesus’s Ascension from the Mount of Olives) was installed behind

the new altar and Mount Olive was presented with a new 3-manual organ, a Johannes Opus 30. The new facilities were quickly put to use as Pr. Sizemore and long-time secretary, Jane Foster, moved from the Wagner House to their new offices and workroom. Fellowship hall tables and chairs, along with conference room furniture were purchased. As always, volunteers from the congregation completed the assembly of these items. The fellowship hall, with its spacious kitchen and pantry were ready for a number of community- 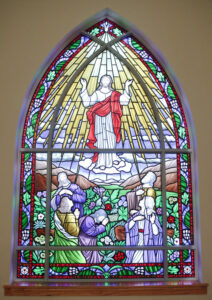 The lower level of the fellowship hall remained unfinished in 2002, with the vision that additional classrooms and restrooms would be added at a later time. This “later time” came sooner than expected. In 2004, plans were drawn up to finish this level. Again, our members who were in the building business donated their labor to finish the lower lever to include three classrooms, an office, restrooms, storage, and a large area that could be used as one, two, or three additional classrooms because of its folding partitions. The area was completed in early May 2005, and dedicated on May 15th. 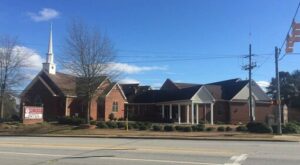